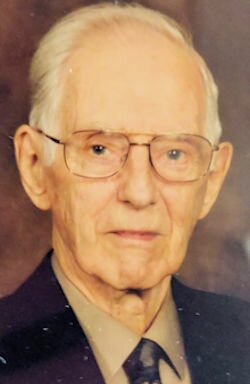 Please share a memory of Neil to include in a keepsake book for family and friends.
View Tribute Book
O'Reilly, Neil- It is with great sorrow that the family of Neil McKenzie O'Reilly announce his passing at Stedman Hospice on December 5, 2022 in his 97th year. He leaves behind his devoted wife, Joan (nee Birdsell). They were married for 69.5 years. Fondly remembered by his daughters, Lyn O'Reilly and Bev (Darryl) Smallman, his grandsons Rod (Teresa) Smallman and Dan (Sam) Smallman. and great-grand daughter Tori Smallman. Predeceased by his parents, Charles Dennis (1953) and Dora May (Marlatt) (1934) O'Reilly, his brother Harold (1973) and sister Jeanne (1997). Fondly remembered by his sister-in-law, Shirley Messecar and her family and the extended O'Reilly and Marlatt families. Neil spent most of his life in Scotland, Ontario, but lived in Paris from 1935 to 1940 while his father managed the Paris creamery, and he and Joan moved to Telfer Place in 2011. He retired from Ladish Company of Canada in 1988 after almost 35 years of service. A very special thank you to all the staff at Telfer Place in assisted living who cared for Dad for over 3 years, and the staff at Stedman Hospice for his care in his final days, and the Palliative Care Team. Friends will be received at the Beckett-Glaves Family Funeral Centre, 88 Brant Ave., Brantford, 519-752-4331 on Friday, December 9th, 2022 from 10:00 am until 11:30 am. A Funeral Service will be held in the chapel at 11:30 a.m. Interment will take place at Scotland Cemetery. Donations to the Tourette's Syndrome of Canada, Stedman Community Hospice or the charity of your choice would be appreciated. A tree will be planted in memory of Neil in the Beckett-Glaves Memorial Forest.
Friday
9
December

Share Your Memory of
Neil
Upload Your Memory View All Memories
Be the first to upload a memory!
Share A Memory
Send Flowers