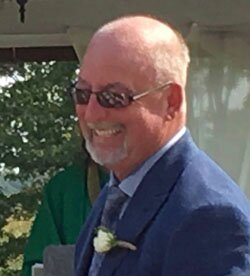 Please share a memory of Michael to include in a keepsake book for family and friends.
View Tribute Book
Anderson, Michael Walter (October 30, 1959 - September 29, 2022) After a short but fierce fight Mike succumbed to Acute Myeloid Leukemia (AML) on Thursday evening. Mike is predeceased by his parents Walter and Kathleen Anderson, and his soul mate and sister Marie Tippett. Mike leaves behind and will be forever missed by his wife and best friend of 40 years Dawn (Peacock) and children Matthew Anderson (Olivia Garr), Mandy Pereira (Anthony) Blair Anderson and daughter-in-law Becky Anderson, all of whom he loved and was so very proud of. He will be greatly missed by his grandchildren and favourite people in the world, Peyton and Ruby Rose Anderson. He will also be missed by his sister Kathy Graham and brother-in-laws Bill Graham and Terry Peacock. His absence will leave a hole in the hearts of his nieces and nephews Janeane and Don Leavitt, James and Sarah Graham, Tracy and Mike Reardon, Mark and Nicole Tippett, Brian and Christy Graham, Jacqueline and Jason Hammerschmidt and Ashley Ritchie and also his great nephews and nieces Richard and Jack Thorne-Botham, Stephanie and Laura Reardon, Valarie and Aaron Tippett, Ruby, Will and Claire Graham and Kehrington Hammerschmidt. He leaves behind so many loved relatives and friends, too many to mention by name here. Mike has always loved music and his favourite thing to do was play his drums. He volunteered much of his time coaching hockey with the Oakville, Burlington and Dundas Minor Hockey associations. He also served consecutive years as President of the Dundas Minor Hockey Association. Mike was a giving man, always looking out for the underdog. He was known to keep Matt’s hockey equipment to pass along to children he knew wanted to play but couldn’t afford the equipment. Many times he ensured anonymous donations were made for families not able to pay the registration fee. He was not a rich man, but he had a heart of gold and developed long lasting friendships with many of those he coached. For the past 9 months Mike was under the exceptional care of Dr. Brian Leber at Juravinski Hospital and we thank him for all his efforts to help Mike conquer this beast. No stone was left unturned. A special thanks to Nurse Practitioner Julia Rivers and Resident Physician Shreyash Dalmia for their care and not being afraid to say what needed to be said. A huge thank you to all of the staff on the fourth floor with a special thanks to nurses Nicole Campbell and Kathryn Fenlon for going above and beyond and holding our hands right to the very end. It is because of all these people that Mike was able to make this journey with grace and dignity. Not all heroes wear capes. As per Mike’s wishes there will be no funeral service. Arrangements have been entrusted with Beckett-Glaves Family Funeral Centre, 88 Brant Ave., Brantford, 519-752-4331. If you like, donations can be made to Helping Heroes Heal (helpingheroesheal.ca) via Chad@helpingheroesheal.ca or to Juravinski Hospital. A tree will be planted in memory of Mike in the Beckett-Glaves Memorial Forest. Mike’s parting words he shouted out loud: Bye, I love you!
Online Memory & Photo Sharing Event
Online Event
About this Event

Share Your Memory of
Michael
Upload Your Memory View All Memories
Be the first to upload a memory!
Share A Memory
Send Flowers