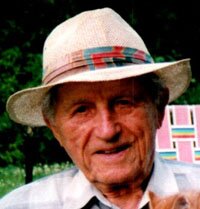 Please share a memory of Wilhelm to include in a keepsake book for family and friends.
View Tribute Book
ASCHE, Wilhelm Friedrich Karl April 26, 1920-September 13, 2021 At the Brantford General Hospital on Monday September, 13th, 2021, in his 102nd year, from complications of a fall. Beloved father of Hildegard 'Hilda' Asche and Gunter Asche. Predeceased by his cherished and beloved wife of 73 years, HIldegard (March, 2021), his parents Wilhelm and Martha Asche and his siblings Hermann, Walter, Gerhard, and Edith. Also survived by his sister, Hildegard, and many nieces and nephews in Germany. Wilhelm was in Wetzleben (now Hedeper) Germany. It was the threat of homelessness in post-war Germany that led Wilhelm to immigrate to Canada in January 1952; but it was impatience that prompted mom to follow that summer. Wilhelm earned his Master Shoemaker credentials in Germany. He operated the Beacon Shoe Repair in Winnipeg Manitoba from the 1950's to mid 60's. From 1970 until his retirement in 1985 Wilhelm owned Standard Shoe Repair on Clarence St. in Brantford. During all these years in business his wife, Hildegard, worked alongside him managing the leather sewing repairs. The business was known for the exceptional quality of the work. Wilhelm enjoyed lively conversations and exchanging views with his customers, many of whom became family friends. Wilhelm was blessed with extraordinary athletic ability and he won many competitive prizes. He was active and fit his whole life and exercised daily until just recently. He played the accordion and organ and enjoyed entertaining family and friends. Wilhelm was the eldest of six siblings and he had a close relationship with them his whole life. He has an intuitive ability to know when family members were in distress. He always helped in any way he could. Wilhelm was a very caring and kind person and a perceptive friend, and he will be greatly missed. The family wishes to thank Kelly at Community Paramedic for her support and kindness. A private family service and interment took place on Friday, September 17th, 2021 at Farringdon Burial Grounds. His wife Hildegard was interred with him as per his request. Funeral arrangements have been entrusted to the Beckett-Glaves Family Funeral Centre, 88 Brant Ave., Brantford, 519-752-4331. A tree will be planted in memory of Wilhelm in the Beckett-Glaves Memorial Forest.

Share Your Memory of
Wilhelm
Upload Your Memory View All Memories
Be the first to upload a memory!
Share A Memory
Send Flowers