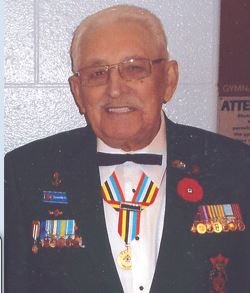 It is with great sadness that we announce the passing of Rolland Bonneville. He was born on September 26, 1926 in Port Severn, Ontario and died peacefully, with family at his side, at St. Joseph’s Lifecare Centre on Friday, August 16, 2019, at the age of 92. Beloved husband of the late Mary Bonneville (nee Pitt). Loving father of Guy (April) Bonneville, Michelle (Matt) Reniers, Tammy Nuttall, and Terry Bonneville. Proud grandfather of Ryan, Jeffrey, Andrew, Kevin, Philip, Brennan, Graeme, Lucas, Connor and Nate, and eight great-grandchildren. Dear brother of Rev. Sister Therese Bonneville, Bertha Taylor and Richard Bonneville. Predeceased by parents Thomas Bonneville and Olympe Bonneville (nee Bourdeau) and sisters Yvonne Henderson, Cecile Cadieux, Agatha Lesperance, and Flossie Bonneville. He will also be missed by many nieces and nephews. Rolland was a veteran of World War II, serving with the Royal Canadian Naval Volunteer Reserve, and of the Korean War, serving with the Royal Canadian Regiment (RCR’s) Special Force. Afterwards, Rolland served many years in the militia, retiring with the rank of Regimental Sergeant Major (WO1). Rolland was an active member of the Korean Veterans Association, Unit 13, Cambridge, Ontario and of the Dunsdon Royal Canadian Legion (461). Rolland had a very strong work ethic. He worked as a letter carrier at the Peterborough Post Office for thirty-five years and also many years as a barber, hairdresser and bartender. He also served with the Corps of Commissionairs. His favourite pastimes were gardening and fishing. A special thank you to the staff of Oriole Avenue and Dr. Hadley of St. Joseph’s Lifecare Centre for their extraordinary compassion and care. Family and friends will be received at the BECKETT - GLAVES FAMILY FUNERAL CENTRE, 88 Brant Avenue, Brantford, Ontario on Tuesday, August 20th from 11:00-12:30 a.m. A Legion Service will follow in the Chapel at 12:30 pm and a Funeral Service at 1:00 pm. Interment Oakhill Cemetery. Donations in Rolland’s memory to the charity of your choice would be greatly appreciated. Online condolences, donations and service details will be available at www.beckettglaves.com.

A tree will be planted in memory of Rolland in the Beckett-Glaves Memorial Forest.

Share Your Memory of
Rolland
Upload Your Memory View All Memories
Be the first to upload a memory!
Share A Memory
Send Flowers